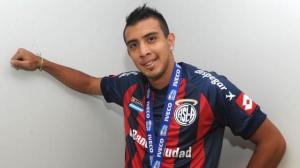 Rodrigo has been a leading figure in the San Lorenzo youth and reserves teams for a long time. Juan Antonio PIzzi, first team coach, has spotted his potential and gave him a chance this season in a league match. According to experts, he has a good chance to become a really good central striker. Currently he has to work very hard to get into the first team and convince the coach that he’s good enough, but without a doubt will be able to achieve that.