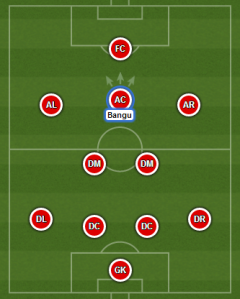 Luzayadio Bangu joined Fiorentina’s youth academy in 2012, coming from Atalanta Bergamo. This season, despite his young age, he became a leader and the best “Viola” player in Campionato Primavera. He led his team to the final of the Coppa Primavera, in which he scored 2 goals. Despite that, Fiorentina lost to Lazio 2-4. Luzayadio is a very mature and versatile player for his age (16 years old) and playing with players who are 3 or 4 year older does not phase him. The media already compare him to players like Ruud Guilit, Andres Iniesta or Marek Hamsik. A few big clubs, including Manchester United, are interested in him, but it looks like Fiorentina will do everything they can to stop its pearl.

“The Congolese prospect has been described as the ‘new Ruud Gullit’ in some quarters and admits he’s been inspired by Andres Iniesta.”