– unpredictability on the ball

– often cuts inside on his left foot to move to a more central attacking position, and uses uses his speed and skill to take on defenders until he finds the space to make an attempt on goal

– often beats an opponent with a trick or feint 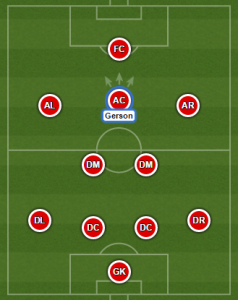 Gerson is a product of Fluminense youth academy. He is considered to be one of the greatest football talents in Brazilian football currently. In 2014, was one of only two Brazilians to feature on a list entitled “TOP 40 young talent in world football – born in 1997″ by The Guardian. The other was Malcolm from Corinthians. At the moment he takes part in the 2015 South American Youth Football Championship with “Canarinhos” U20 – it is worth noting that despite being one of the youngest members of the team he is the star that decides about the image of the team.

“Gerson has already attracted the attention of Europe’s top clubs. The club have reportedly turned down an approach from Juventus and Brazilian media have also spoken about Manchester City monitoring his progress.”

Julián Álvarez last seven games for River Plate:
Erik Botheim vs AS Roma
20-year-old Raphinha for Vitória Guimarães during the 2017/2018 season:
3 years ago, 20-year-old Matheus Nunes was playing for the 6th tier club Ericeirense and was helping his family in their bakery.
Patson Daka vs Spartak Moscow
✅ Vinícius Júnior 20/21: 49 games, 6 goals & 4 assists
Loading Comments...
%d bloggers like this: