– midfielder who can perform at all of midfield positions, linking up the team’s midfield and attack with ease and effectiveness

– his stamina, determination and pace enables him to cover a lot of ground ground 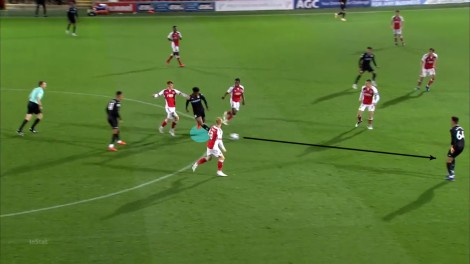 Chukwuemeka with a superb run through the middle and good line-breaking pass to his teammate.

Chukwuemeka makes a good interception and starts the attack of his team.

Carney Chukwuemeka joined Aston Villa youth academy from Northampton Town in 2016 aged only 12. He is considered to be the most talented English player born in 2004. After impressing for Villa U18s he was promoted to the U-23 team and now he’s playing against players up to seven years his senior. Many top clubs including Manchester United, Manchester City and Liverpool wanted to sign him but he signed his first contract with Aston Villa and decided to continue his development in Birmingham.

“I am happy to have finally committed my future to Aston Villa. Can’t wait for the new season.”

(Carney Chukwuemeka on Instagram after signing his first professional contract)