Over the past decade, Ligue 1 has become one of the main generators and developers of young talent in world football, specifically midfielders. From flamboyant players like Paul Pogba to destroying generals in N’Golo Kanté, we have seen some of the most gifted young midfielders of different profiles and backgrounds make their name in this league and Aurélien Tchouaméni is no different. The midfielder who’s earning glaring praise from his current teammate and footballing maestro Cesc Fàbregas and is already being described as a combination of Patrick Vieira and Paul Pogba (obviously).

The 21-year-old French midfielder has been linked with moves to European giants such as Chelsea, Manchester United, and Juventus, and with Ligue 1 clubs knee deep in financial trouble it’s expected Monaco will sell their highly coveted Frenchman and we should anticipate a transfer away from Ligue 1 outfit in the nearby future. 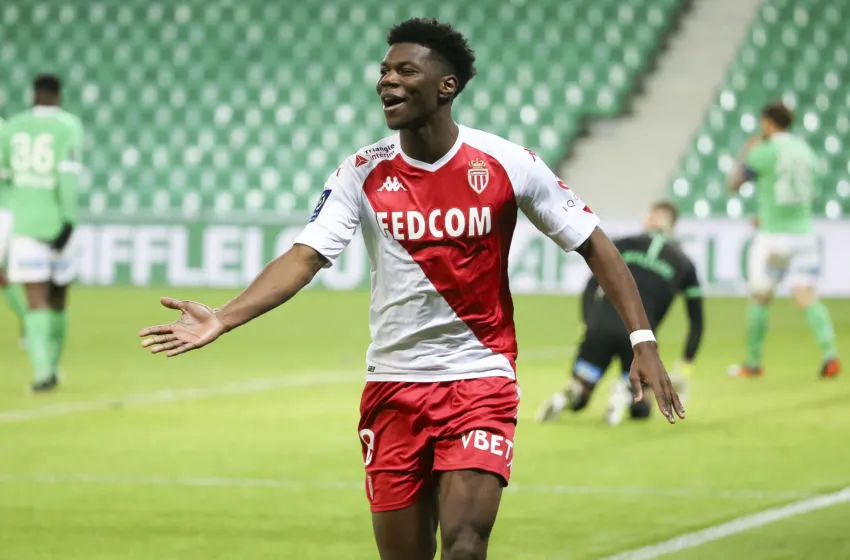 Born in the Normandy city of Rouen on the 27th of January 2000, to Cameroon parents. Tchouaméni grew up in the suburbs of Bordeaux and was first introduced to football by his father, who played at an amateur level. He joined Bordeaux youth academy at age 11, and he excelled through the age-group teams at the Matmut Atlantique. It was in the years preceding Tchouaméni’s senior breakthrough however that he was first coached by Philippe Lucas. Lucas said: ‘I saw him play at 18 for the first time. I saw potential but a player who still needed to grow. He needed to develop himself physically and work technically.’ Just like so many of his agemates, he is superb technically after years of playing in the streets having to dodge cars and cyclists in the busy streets of Bordeaux. This team also featured the talents of Jules Koundé. Both players were in their embryonic career stages under Philippe’s tutelage, with Koundé two years Tchouaméni’s senior. Tchouaméni made his debut for Les Girondins in a UEFA Europa League victory over Latvian side Ventspils at the age of 18 years old and was given his French top-flight bow against RC Strasbourg a few weeks later. In January 2020, AS Monaco paid £16 million to acquire Tchouaméni services after an impressive time with his boyhood club and saw Tchouaméni as their long and sought after Fabinho replacement. They were struggling in the league and would finish ninth under Robert Moreno. Tchouaméni played three times between his arrival and the abruptly called end of the season in March (due to the pandemic), all without starting. Moreno was sacked, and Niko Kovac was hired ahead of the 2020/21 season. This changed the club’s outlook and rebounded them to the authentic values AS Monaco personifies. Unrelenting faith in youth, with a young and ambitious coach to nurture them – Tchouaméni being right at the front of that. Last season he blossomed and Kovac was more than pleased with how he was developing, “He [Tchouaméni] plays for the team, runs for the team, [he] gives us more dynamism in midfield”.

An athletic player who combines his sharp turn of pace with a fine-tuned anticipation and reading of the game, Tchouaméni is a nightmare to play against. Not only does he win the ball back for Monaco with astonishing regularity, but he also moves it along beautifully once he has, with his range of passing allowing the midfield runners in front of him to dart into space up ahead knowing that possession, and therefore the space behind them, won’t be ceded. Tchouaméni cuts quite the imposing figure in midfield. The rangy defensive midfielder’s breakout season saw him being used mainly in a double pivot for Niko Kovač’s Monaco – struck an excellent and lovely to watch partnership with Youssouf Fofana, although he also saw some time in a three-man midfield either as the deepest midfielder responsible for shielding the backline or as a box-to-box midfielder on the right of the three.

As mentioned above, Tchouaméni’s main strengths are apparent in the defensive phase. At the tender age of 21, he has already proven to be one of the best defensive midfielders in European football. This is apparent in his exceptional metrics (courtesy of Fbref) where Tchouaméni ranks in the top percentiles for virtually every defensive metric, showing himself to be a very polished and well-rounded defensive player. As seen in the graphs below. 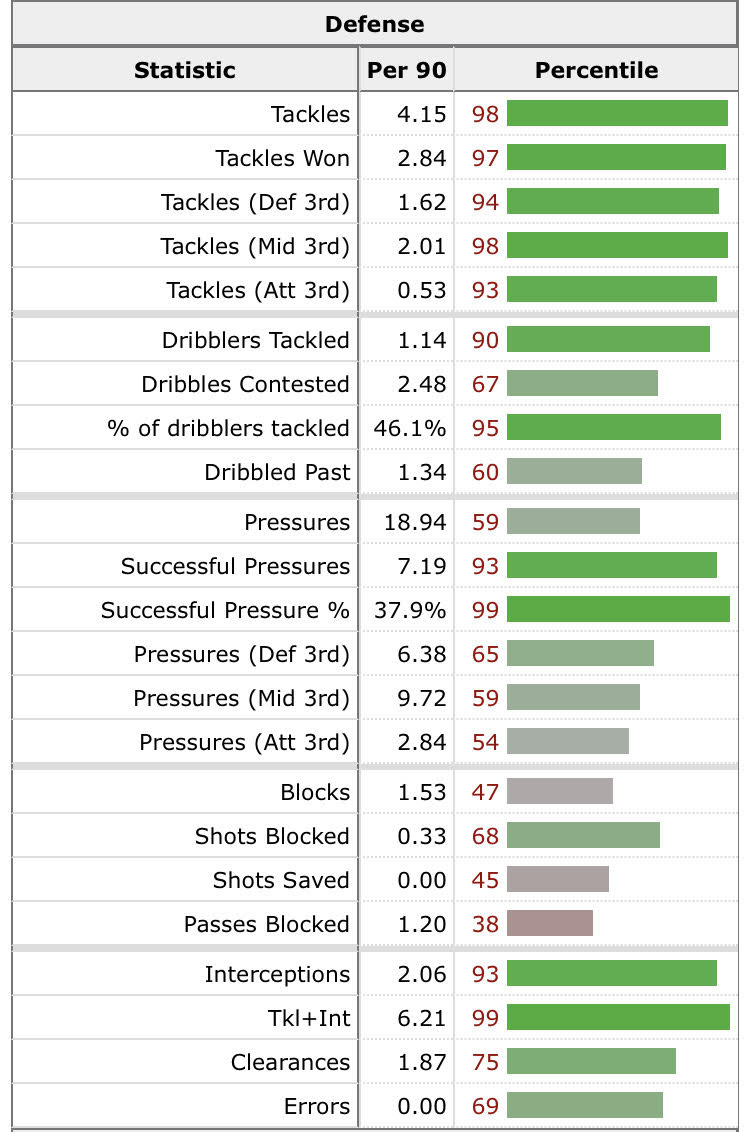 Tchouaméni is an exceptional tackler at his position, ranking in the 98th percentile for midfielders in the top 5 leagues with 4.15 tackles won per 90 – more than other world-class defensive midfielders like Casemiro and N’Golo Kanté by combining his aggressive nature in defending and his awareness of attacking situations developing around him can time his challenges well.  With a unique combination of size, strength, timing, and coordination, he is quite proficient at cleanly dispossessing attackers frequently. He is a very athletic and mobile, imposing presence, who stands at 1.87 meters (6’1”), and has extremely long legs which help him with many defensive actions – like tackling. Furthermore, his long legs mean he has a big stride when covering long distances, on and off the ball. He is also a naturally fast player with a great engine.

As seen above, Tchouaméni is able to read 1v1 very well before an opponent can even execute their move, they even begin, doing so here against Nice to immediately regain possession in the defensive third and giving Monaco a chance to launch a threatening counter.

Despite only having been playing senior football for three years, Tchouaméni is already adept at reading the game like an experienced veteran. This has given him the incredible knack for “being in the right place at the right time” that many of the best defensive-minded midfielders have and it displays itself in a multitude of ways, fundamentally in his interception numbers. Averaging 2.06 interceptions per 90 – which is significantly more than other smart midfielders like Fabinho (1.83) and Frenkie de Jong (1.20). Tchouaméni ranks in the 93rd percentile of midfielders. This is due to a blend of his intelligence, mobility, and pure build.

This image shows Tchouaméni as the deepest midfielder in a 3 man midfield guarding the space between the midfield and defensive line. As soon as he spots the midfielder shaping to play the ball to the striker’s (Icardi) feet, he is swift to cover the ground and reach out his long legs to cut out the pass.

Despite still being a very young player who is nowhere near the complete player. Tchouaméni doesn’t have any obvious holes in his game. Any vulnerabilities he has have less to do with technical or physical limitations but rather are either a result of inexperience or simply his style of play.

Even though he shows excellent balance and agility, Tchouaméni isn’t much of a ball carrier, a progressive in that fact – he attempts 4.54 progressive carries per game, which ranks him in the 60th percentile of midfielders in the top 5 leagues – which is less than his countryman Eduardo Camavinga (6.16) and significantly less than Bruno Guimarães (9.09). On the rare occasion where he attempts to carry the ball over and progress it over larger distances, he seems fairly uncomfortable. His gangly frame sometimes ends up in him getting the ball caught under his feet, leading to him being easily dispossessed.

In the images above, Tchouaméni has open space to carry the ball and is on the counter-attack with 2 teammates on either side of him to play in through on goal but instead, he continues to progress the ball into the box and is tackled by Presnel Kimpembe this is mainly due to decision-making, I’m confident that it is something he should be able to figure out with more experience.

This is a fairly common problem for young defensive midfielders who aren’t used to playing for bigger teams that usually see more of the ball. Even some of the best DMs in the world struggled with this early in their careers, from N’Golo Kanté to Casemiro. This leads me to believe that it is simply a matter of gaining more experience in a more possession-oriented side, as the two examples above have shown that it is something that a player can improve as they gain more exposure to playing in different midfield roles.

Aurélien Tchouaméni, one cannot help but be excited by what lies in store. His progression has been rapid. A series of moments in his career has driven him to the next. With only three senior seasons under his belt, he is already snapping at the heels of the national team midfielders and garnering attention from the biggest clubs in Europe. Tchouaméni is a part of one of the most talented generations of French midfielders of the past two decades – Camavinga, Caqueret, and Soumaré are just a few names football fans are familiar with. With his blend of size, mobility, defensive intelligence, and progressive passing that will surely improve, he would be an excellent addition for a number of top teams all over Europe, and at just 21 years of age, he looks to be a player who could be one of the best midfielders in world football within the next 5 years.

Back four with U-21 players from Centre de formation de l'OL.
French Cup 02/03 final: PSG vs Auxerre 1-2
No player has more successful dribbles in Serie A this season than AC Milan's Rafael Leão.
European U-23 (players born in 1998+) Team of the Week by Football Talent Scout!
21-year-old Tomáš Rosický for Borussia Dortmund during the 2001/2002 season:
Sergio Gómez 21/22:
Loading Comments...
%d bloggers like this: