– likes to run at the defence

– likes to roam from position 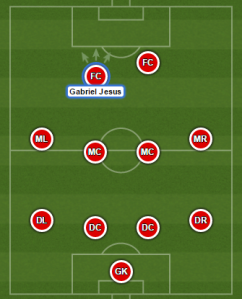 Gabriel Jesus started his adventure with football in a tiny club Anhanguera. At 15 years of age, he showcased himself at a youth “Copa Sao Paulo” tournament, where he scored 29 goals and attracted attention from the biggest Brasilian clubs. In 2013, he moved to Palmeiras. He became a real goalscoring machine in the youth setup of “Verdao”. He made his debut in the senior team and is a real fan favorite. He played very well at the U-20 World Cup 2015, where he managed to start 6 games and help Brazil to a second place at the tournament.

“He will become a major player in Brazilian football, and also the Seleçāo, if they have patience. He is a boy who is easy to speak with and work with and who is different to the others in the question of training, always giving more than 100 per cent.”