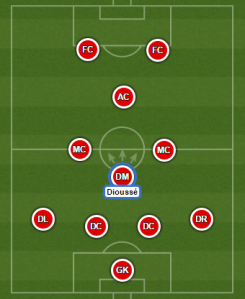 Assane Dioussé came to Italy as a very young boy. His home club is Empoli, where he played for their academy. He made his professional debut on 15 August 2015 in Coppa Itaila game against Vicenza Calcio. His Serie A debut happened just a week later, in a 1-3 home loss against Chievo Verona. He formed a very interesting partnership with a talented Polish player, Piotr Zieliński, and practically on the spot became a very important player for Empoli, as well as being one of the biggest discoveries of the first round in Serie A. If he keeps this up, it is almost certain that richer club than “Azzurri” will be in for him very soon.

“Every year I return to Senegal and it pushes me to work even harder to make my family proud for everything they have done for me.”