– number “9”/target man with an impressive height and physique

– likes to hold the ball up and link play

– does well in the pressing 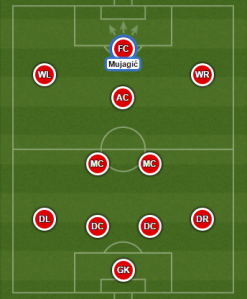 Ajdin Mujagić is a youth exponent from Željezničar Sarajevo. He made his professional debut for “Željo” on 25 October 2015 in a league fixture against Celik Zenica, in which he scored his first senior goal. He is one of the biggest talents of a very interesting generation of Bosnian players born in 1998 which includes, among others, Zinedin Mustedanagić, Ermedin Demirović, Alan Delić, Mirza Mustafić and Seid Behram. He has been capped at U16, U17, U18 and U19 level for Bosnia. Some of the fans view him as the future number “9” of the senior national team. However, he still has a lot of work to do to replace the likes of Edin Džeko and Vedad Ibišević.

“I began training football at the age of eight in Borac from Tesanj. I’ve always loved the sport and for the past two years I play for Zeljeznicar. I’m satisfied with my performance, and also I’m happy they have given me a chance to play for Zeljeznicar’s senior team. I don’t get many minutes there but it’s a start. I’m getting in shape, we have exceptional working conditions here and I’m ready to respond to coach and staff’s requests. It’s every player’s dream to play for the national team, and fortunately it came true for me. I hope I’ll be able to play for national ‘A’ team some day.”