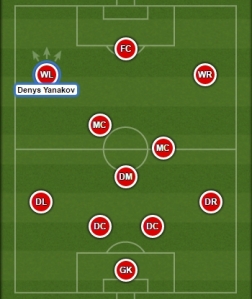 Denys Yanakov is a product of Dynamo Kyiv youth academy. During the 16/17 season, he was one of the biggest stars of Dynamo U-19 team, where he scored 3 goals in 6 games, and his team was knocked out at the last 16 stage after a 0-3 defeat against Ajax Amsterdam. Other players from the team worth mentioning are surely Bogdan Lednev, Mykola Shaparenko, Sergiy Buletsa, Vladyslav Dubinchak and Akhmed Alibekov. He is also an Ukrainian youth international and is currently a member of the U-19 team.