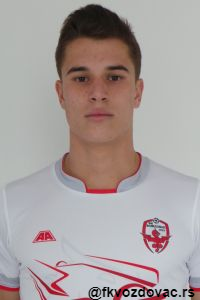 – determined forward with killer-instinct, very good technique on the ball, decent dribbling skills and cleverness at his off-the-ball movements

– possesses good control, quick feet, and technical skills, which, along with his strength, enable him to retain possession when playing with his back to goal and hold up the ball for teammates

– dangerous on the counter thanks to his pace and acceleration

– able to sniff out a goal in any situation thanks to his great shooting skills, movement and ability to play off of other players

Filip Stuparević is a product of FK Rad youth system – academy that has produced number of talented players in recent years, such as Nemanja Pejčinović, Uroš Đurđević, Andrija Luković, Andrija Pavlović, Nemanja Mihajlović, Nikola Stojiljković and Nemanja Kojić. In 2016 Filip has signed a three year contract with FK Voždovac. He made his professional debut on 23 July 2016, at the age of 15, replacing Slaviša Radović in 88 minute of a league fixture against Spartak Subotica. Thanks to that he became the youngest player in the Serbian SuperLiga history. He scored his first senior goal on 5 August 2017 in a 3-1 away win over Partizan Belgrade.

One response to “Filip Stuparević”