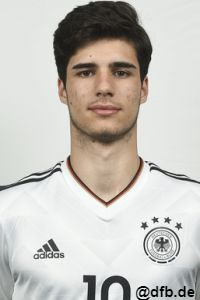 Elias Abouchabaka joined RB Leipzig youth academy from Hertha in 2015. RBL is a club which invests large money in its first team, but does not omit its youth academy, which signs very talented players from all over Germany and Europe. Elias represented his country at the European Under-17 Championship, where young Germans made it to the semi-final, but got knocked out by a very strong Spain team. He was promoted to the first team before 2017/2018 and impressed a lot during pre-season and it is almost certain that he will make his senior debut for ”Die Roten Bullen” very soon.

“It is easy to see why Abouchabaka was in demand. Being a left-footed number 10, he will inevitably draw comparisons with current Germany international Mesut Özil. But the Berlin native seems more direct, capable of driving runs from deep and providing a serious goal threat in his own right.”

One response to “Elias Abouchabaka”