Ansu always played with older players than him and he does very well almost every time. That was also in his last season in Juvenil A. Ansu Fati, born in 2002, has had a phenomenal season. In my opinion, he was the best Juvenil A player. It started with the „Villa de portugalete” tournament, where he won the MVP award. He entered Juvenil A at the age of 15 and made a difference from the first match. He scored 20 goals during the season and had 9 assists. He was the best scorer of the team and he also had the most assists. In 9 matches of the UEFA Youth League he scored 4 goals and had 3 assists. Fati had direct participation in a goal every 78 minutes. That’s 44% direct participation in all Juvenil A goals at UYL. Excellent numbers. 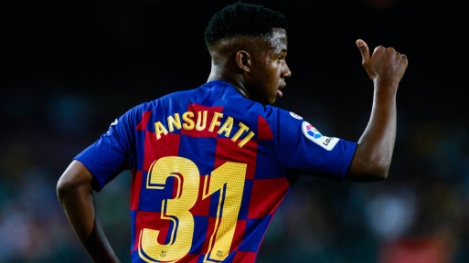 Style of play and position

Last season, Ansu played in almost all matches as a left winger. He was doing very well. Fati is a footballer who can do well in any position in the line of attack. He can play as the central forward, as a false nine and as the right striker. For his age he is a very complete player. That’s what I pay the most attention to. His intelligence, movement without the ball, positioning, looking for free spaces, timing. It’s all on a really high level. Ansu is a player with great dribbling, technique, acceleration at the first meters, good body balance, quick foot. He can work in pressing and has a good vision of the game. He sees a lot, searches for opportunities to play balls between lines. Quite often he also plays long balls. He’s also fast and can hit from behind the penalty box. Fati is also really unpredictable. What can he improve? In my opinion, it’s still a finishing. Despite scoring 20 goals, Ansu sometimes missed in fairly simple situations.

I would compare his playing style to Ousmane Dembele and Neymar.

A few days ago, an extraordinary thing happened. 16-year-old Ansu made his debut in the first team of FC Barcelona. He became the second youngest player in Barca’s history to play in a league match. Only Vicente Martinez, who made his debut against Real Madrid in 1941, was younger. He played 15 minutes in the game vs. Betis. Those were promising minutes. Ansu entered the field without any stress (at least that’s what he looked like), had the opportunity to score a goal, could also have an assist and should have won a free kick near the penalty area (the referee, however, decided otherwise).

I expect a lot from Ansu this season. In the preseason he played mainly in Barca B. In Juvenil A he played only 1 match. In 8 matches he scored 5 goals and had 2 assists. Definitely one of the best Barca B players in the preseason. At the moment he is still training with his first team. I think he can get a call-up to the Osasuna game because Messi, Suarez and Dembele are still injured. Maybe he’ll play more minutes. I think he will also be a Barca B player. Under the arms of Garcia Pimienta he can develop even more. Definitely one of my favorite U18 players. Joy to watch. I hope he will continue to develop so well. It should be added that a little over a month ago he extended his contract with Barcelona until 2022. His release clause was set at 100 million euros.