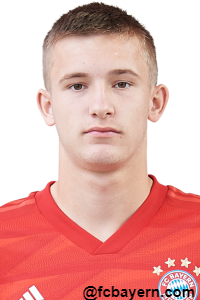 – good reaction to the loss of the ball with good aggressive attitude, and good recovery of his position/tenacious in the defensive phase

Rhein orchestrates the play – he makes an excellent pass to his teammate.

Rhein makes a brilliant pass to his teammate after a quick combination.

Torben Rhein joined Bayern youth academy from Hertha in 2017. He is a part of a very talented generation of Bayern players born in 2003 which includes, among others Jamal Musiala, Luca Denk, Liam Morrison, Bright Arrey-Mbi, David Herold, Lasse Günther and Angelo Brückner. In 2019, Chelsea tried to sign him but Torben decided to stay in Munich and continue his development in Germany. He is also a regular German youth international and currently he is the captain and leader of Germany U-17 national team.