Youth career: AS Lieusaint, US Sénart-Moissy, US Torcy PVM, AS Saint-Étienne (since 2018)

– midfielder who can perform at all of midfield positions, linking up the team’s midfield and attack with ease and effectiveness

– his stamina, determination and pace enables him to cover a lot of ground ground

Gourna-Douath wins the ball back and makes a great combination ended with an assist. 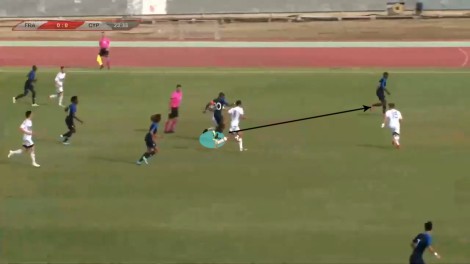 Gourna-Douath stays calm under pressure and starts the counter-attack of his team.

Lucas Gourna-Douath joined AS Saint-Étienne youth academy from US Torcy PVM in 2018. He signed his first professional contract with the club already at the age of 16. He was promoted to ASSE first-team this season and is tipped to follow in the footsteps of other very talented youth graduates in recent years such as Ronaël Pierre-Gabriel, William Saliba, Arnaud Nordin and Wesley Fofana. Lucas is also the captain and one of the leaders of France U-17 – a team with many highly rated prospects such as Lenny Lacroix, Hannibal Mejbri, Lisandru Tramoni, Loum Tchaouna and Matthis Abline.