– perfect mix of a pure defender and ball-playing defender

– comfortable to play as a RCB & LCB

– feels very comfortable and has a good composure on the ball, making part of the team’s build-up process at the first instances

– excellent passing skills at all distances

– known for his composure, elegance, ball-playing ability, and confidence in possession

– very dominant in the air

– perfect for the possession-based style

Kaiky intercepts the ball and makes a perfect line-breaking pass to his teammate.

Kaiky with a great ability to read the game – he makes a last man tackle and saves his team. 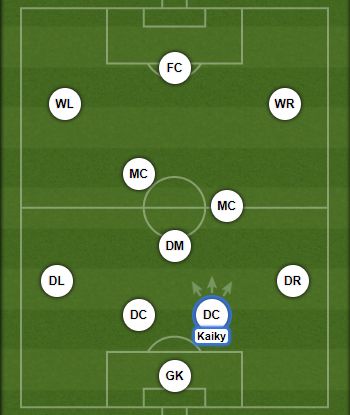 Kaiky Melo is a product of a famous Santos youth academy. In 2019, Kaiky was the leader and captain of Brazil national team at the South American Under-15 Football Championship, where young ‘Canarinhos’ won the gold medal and presented a great generation of talented players such as Matheus Nascimento, Vinícius Tobías, Ângelo Gabriel, Arthur Wenderroscky, Robinho and Sávio. Kaiky made his professional debut for Santos on 28 February 2021 in the Campeonato Paulista game against Santo André. He scored his first goal just two weeks later against Deportivo Lara.