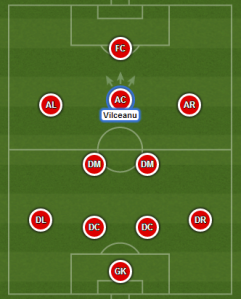 Robert Vâlceanu – this name has been talked about a lot in recent times in Romania, and no wonder, because he is a great young talent. From the very early years he has been a recipient of many different awards which fall under the category of “best player award”. In this past season he had two defining moments – firstly, his debut in the UEFA Youth League against Basel, and a few months later, on March 15th 2014, a dream debut in the league match against Gaz Metan Medias, where he scored a wonderful goal from a free kick. Steaua coach, Laurentiu Reghecampf, is a big fan of this young boy’s talent, which is why he has a few appearances in the Romanian Liga 1. He is a youth international of Romania and one of the leaders in the U-17 national team.

“Remember this name! We have high hopes for him. He’s a player we can rely on in the near future.”