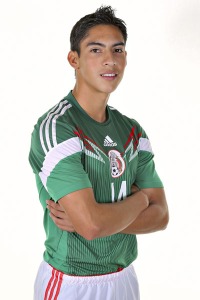 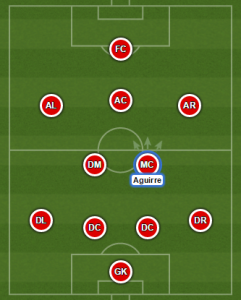 2015 CONCACAF U-20 Championship winner with Mexico.

Erick Aguirre’s home club is Monacras Morelia. He is one of the most talented youth players in Mexico. He made his debut in Primera Division de Mexico on August 9 2014 against Club Tijuana, where he replaced Jorge Zarate in the 79th minute. It took him just four games at a senior level to score a goal – and what a goal that was. He scored against Pumas, but that did not help Monarcas who fell 2-3 to the Pumas. In 2013, he went to the FIFA U-17 World Cup in United Arab Emirates, where he played in 6 out of 7 matches. Young “El Tricolor” surprisingly got a 2nd place in that tournament. In 2015 he won CONCACAF U-20 Championship – he was a very important player for young “El Tri”, despite being two years under the age limit for the category. It’s worth noting that he played as a right back, while his nominal position for his club is in centre of midfield. In October, “The Guardian” chose him to the TOP 40 of biggest talents in world football.

“Erick Aguirre is from an area of Mexico infamous for violence related to drug trafficking, but the midfielder could soon be putting La Ruana Michoacan on the map for an altogether more positive reason. The technically gifted Aguirre is already a regular starter in Mexico’s first division, playing at the heart of Morelia’s midfield, and names Andres Iniesta as his role model.”

BVB U-19 this season:
31/05/2009: 14-year-old Islam Feruz makes his Celtic debut in Tommy Burns' memorial match.
Goalkeepers with the highest 'prevented goals' in Europe's top 5 leagues this season according to Wyscout:
Julián Álvarez last eight games for River Plate:
European U-23 (players born in 1998+) Team of the Week by Football Talent Scout!
Yan Couto for Braga this season:
Loading Comments...
%d bloggers like this: