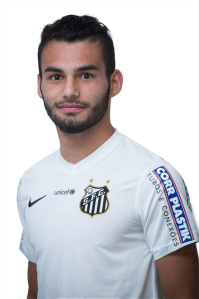 Thiago Maia started his footballing adventure at a small club by the name of Extremo Norte. In 2010, he moved to Sao Caetano, and a year later to the massive Santos. He made his Campeonato Brasileiro debut on 25 October 2014, replacing fellow youth graduate Serginho in a 1–1 away draw against Chapecoense. Currently his footballing talent is maturing at “Alvinegro Praiano”, around other very talented players such as Gabriel Barbosa, Caju or Jorge Eduardo. Thiago is also a youth international of Brazil. He played at the 2013 FIFA U-17 World Cup and Sudamericano U-20 2015, where young “Canarinhos” did not achieve success despite high expectations.