– often cuts inside on his left foot to move to a more central attacking position, and uses uses his speed and skill to take on defenders until he finds the space to make an attempt on goal

– unpredictable for his opponents

– specializes in beating players over a short distance 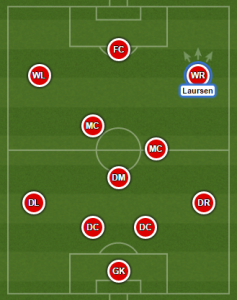 Nikolai Laursen is considered as one of the greatest talents in Denmark. He comes from Brøndby IF youth academy. He made his Superligaen debut on 26 April 2015 against FC Vestsjælland, in which he replaced Alexander Szymanowski after 84 minutes in a 4-0 home win. He moved to PSV Eindhoven during the summer transfer window 2015 for a fee of about €1,3 million. History and examples of Christian Eriksen, Viktor Fischer and Nicolai Boilesen show that the Eredivisie is a very good direction for young Danish players and it seems that Nikolai made a good decision to join the Dutch champions.

“I feel the time has come to test my talent in a big European club and at PSV Eindhoven I have the chance to take the next step in my career.”

(Nikolai Laursen – after signing a contract with PSV)

Julián Álvarez last seven games for River Plate:
Erik Botheim vs AS Roma
20-year-old Raphinha for Vitória Guimarães during the 2017/2018 season:
3 years ago, 20-year-old Matheus Nunes was playing for the 6th tier club Ericeirense and was helping his family in their bakery.
Patson Daka vs Spartak Moscow
✅ Vinícius Júnior 20/21: 49 games, 6 goals & 4 assists
Loading Comments...
%d bloggers like this: