– suitable to play on both wings

– capable of scoring goals due to his powerful, accurate striking ability from distance with both feet 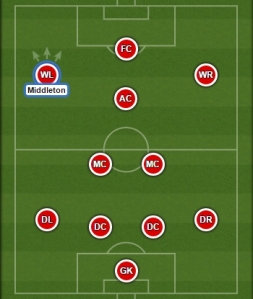 Glenn Middleton joined Norwich City youth academy in 2013. On 1 January 2017 he celebrated his birthday by signing a first professional contract with Norwich that will keep him at Carrow Road until the summer of 2019. Few weeks later, thanks to his great games in the Premier League 2, he was named on the bench for the first team’s FA Cup third round replay at Southampton. He made his Scotland U-17 debut at the age of 15 and already represented his country twice at European Under-17 Championship. He is also a part of a very strong generation of Scottish players born in 2000 which includes, among others, Daniel Church, Jordan Houston, Kerr McInroy, Jack Aitchison and Zak Rudden.

‘For those to whom the Scot remains an unknown quantity, he is a traditional, pacy and powerful winger. If asked for a role model or a player that he bases his game around, his answer is simple: Gareth Bale. “I’m constantly watching videos of him (Bale) to try and incorporate what he does so well into my own game” says Middleton – we’ve had the proclaimed Norfolk Messi in Wes Hoolahan, the Norfolk Cafu in Russell Martin, perhaps it is now time for the rise of the Norfolk Bale? No pressure, Glenn!’